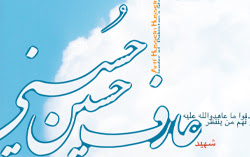 In the name of Allah ST

Salamon alykom wa rahmatollah.
Today I come with 3 fine poster of Shahid Aref Hussein Husseini rwa Who was leader of shia in Pakistan and the representative of Imam KHomeini rwa In Pakistan before is martydom.
SOME ACHIEVEMENTS OF SAYED ARIF AL hUSSAINI
Once, two days prior to Idd al Adha, Sayed Arif Hussain returned to Peshawar after a tour of some important city. He called Abbas, the cheauffer, and gave him Rs 500 to go to the bazaar and buy some materials for taking to his mother in Para Chinar. After giving the money to the person he retired to his room for rest. Abbas sat for a while in the Madrasa brooding that the master hadn’t given him his wages for the past two months and even he hadn’t given him any money for the ensuing Idd. He sat brooding on the steps of the building that he had no money to buy anything for his children for the celebration of the Idd. He wondered from whom he could get a loan to meet his urgent need. He then thought that he would go to the secretary of the Madrasa to ask for a Rs 2,000 loan with a promise that he would give back the money after he got his outstanding wages. The driver was immersed in his thoughts when he heard the foot-steps of someone descending the staircase. He saw that Sayed Arif Hussaini was coming down the stairs. He took out some money from his pocket and gave him and said that he should do some shopping for the Idd for his children!
Abbas also related that once Allama Arif Hussaini was in proceeding to Para Chinar to celebrate the Idd with his children. Those days it rained heavily and there were floods in the Karm Agency. A big stream was flowing furiously a few miles from Para Chinar that had obstructed the flow of the traffic. On both sides of the stream many vehicles were stranded. . Hundreds of persons were eagerly waiting to reach their destinations for the Idd. Observing this the driver, Abbas, too was worried. At that moment Sayed Arif Hussain asked him to step into the stream and gauge its depth and flow. After the inspection Abbas said that it would be impossible to negotiate the stream in the car. The Sayed thought for some time and told Abbas to say Bismillah and continue the journey. When he brought the car to the bank of the stream the people waiting there pleaded not to embark on the hazardous adventure. They said that the car would be washed away by the furious waves of the flood. After a while Abbas looked at his master in desperation. But Sayed Arif had his eyes closed and was reciting some verses. Abbas says that he felt that someone picked up the car and put it on the other side of the stream!
MARTYRDOM—MY INHERITANCE
.Allama Sayed Arif Hussain al Hussaini was martyred on the morning of August 15, 1988 at the Madrasa Jameat al Aarif al Islamia, Peshawar. Although he was elevated to the august status of martyrdom, the Community lost an enlightened, pious and dedicated leader. After completing his morning prayers, the Sayed went to the upper floor of the building when the Ibn e Muljim of the time stealthily crept up to shed his innocent blood. The man was crouching on the staircase when the Sayed was climbing down. The fiend fired with his pistol on the chest of his victim and fled the sacene. Allama Sayed Javed, who was performing the ablution on the higher floor, heard the thud of someone falling down. He hurried down to find the Sayed in a state of Tashhahud. He thought that the Sayed had fallen down the staircase. He took hold of him and tried to raise him up. But to his dismay he noticed blood gushing out from the Sayed’s chest. He started beating his head and shouted that the Community had been orphaned. One of the students of the Madrasa, Sayed Tauseef Haider, had seen the culprit running away from the scene of the crime. The other persons too rushed out of their rooms and found their mentor fatally injured. They couldn’t control their emotions and started beating their heads and chests. The Sayed looked at the walls of the building with feeling of adieus and looked ready for departure from the transient world. He was rushed to the Lady Reading Hospital where he breathed his last!
Download it and say salawat AlanNabi Muhammad SW
Ya Mahdi Aj Adrekni

Allah keep us over sins inshallah.
mosafere karbala at 5:56 PM